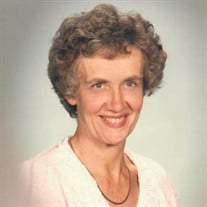 Sue Mary Angell was born on May 11, 1934 in Jamestown, New York. She passed away on February 11, 2022 in Redlands, California at age 87. Sue graduated from Jamestown High School in 1952 and earned a degree in History from William Smith College in Geneva, New York. She went on to earn a Master’s of Science in Education from Baylor University in Texas. Sue spent 25 years traveling the world as an US Air Force wife while raising their two daughters. At all of her husband’s assignments she was active in Family Services, Officer’s Wives Clubs, Girl Scouts and many other organizations. After raising her children, Sue taught for many years at Colton Joint Unified School District. She enjoyed teaching Special Education classes which gave her an opportunity to work with the same children over a course of several years. After her retirement, Sue continued to enjoy traveling the world. She visited all seven continents and numerous countries. She especially enjoyed seeing the penguins in Antarctica. Her favorite country was China which she traveled to several times. Sue was a long-time and active member of AAUW and the JN Chapter of P.E.O. She volunteered for many years with the American Cancer Society Discovery Shop, and also with Youth Hope where she was able to continue her passion of working with children and teens. Sue was a parishioner of Trinity Episcopal Church of Redlands and an active member of the Alter Guild. Sue is survived by her sister and brother-in-law Sabina and Allen Duke of Boulder City, Nevada and daughters Christina Ahlers (husband Dave) and Diana Chian (husband Jason) all of Redlands, California. Sue is also survived by seven grandchildren, Corey Ahlers, Brian Ahlers, Rick Burgan, Curtis Burgan, Paula Snyder, Robin Dotson and Theresa Burgan, along with 18 great-grandchildren. Services will be held at 11am on Saturday, February 26th at Trinity Episcopal Church in Redlands. In lieu of flowers, donations may be made to Youth Hope and Trinity Episcopal Church Altar Guild, both in Redlands, California.

Sue Mary Angell was born on May 11, 1934 in Jamestown, New York. She passed away on February 11, 2022 in Redlands, California at age 87. Sue graduated from Jamestown High School in 1952 and earned a degree in History from William Smith College... View Obituary & Service Information

The family of Sue Hartley Angell created this Life Tributes page to make it easy to share your memories.

Send flowers to the Angell family.