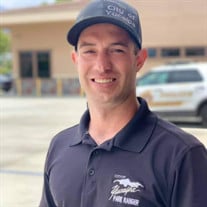 Steven Randall Young’s Obituary Steven Randall Young was born at Loma Linda University Medical Center in Loma Linda, CA on July 17, 1991. His childhood was spent in San Bernardino and Highland, CA riding bicycles around the neighborhood while the sounds of 80s and 90s rock blared out of his parents' garage, and at his second home, Civitan Little League, where he made many lifelong friends. Steven was a natural at anything he did, and in high school, he was drawn to golf, water polo, and swimming. He competed in the California Interscholastic Federation Championship for swimming and still holds a record for the medley relay at San Gorgonio High School in San Bernardino, CA. After high school, Steven moved to Redlands, CA with his family and applied his natural abilities to learning the boating industry and worked as a service manager for the largest marina in Lake Arrowhead. There he maintained boats for Brian Wilson of The Beach Boys and Sammy Hagar of Van Halen. During this time, he attended numerous concerts of his favorite bands and musicians. In 2017, his daughter, Coral Lorraine Young, was born and the next few years would be spent enjoying time with her and his step-son, Lucas Todd, at Disneyland and teaching them how to ride bicycles like he did as a child. In 2019, he began work with the Public Works Department for the City of Yucaipa where he was later promoted to Park Ranger. On September 11, 2021, Steven was involved in a motorcycle accident near Forest Falls, CA and later died at Loma Linda University Medical Center from injuries sustained in the accident. He is survived by his fiancée, Dominique Marie Burrell of Redlands, CA, his daughter, Coral Lorraine Young of Redlands, CA, his step-son, Lucas Alexander Todd of Redlands, CA, his parents, John Randall Young of La Quinta, CA and Gloria Licata Young of Redlands, CA, his brother, John Walter Young of Redlands, CA, his grandparents, Terry Walter Young and Joan Young of Cherry Valley, CA, and many aunts, uncles, and cousins. Steven was a good-hearted and hardworking person who loved learning new trades that he could use to help others. Whether he was painting entire houses or changing oil on a car, he loved working outside with his hands. He left us too soon and will be dearly missed. A memorial service will be held on October 18, 2021 from 11:00 a.m. to 12:30 p.m. at Cortner Chapel, 221 Brookside Ave., Redlands, CA 92373.

The family of Steven Randall Young created this Life Tributes page to make it easy to share your memories.

Send flowers to the Young family.