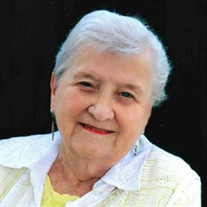 Sally Jane (Rigby) West of Redlands died January 28, 2022 at the age of 95. Sally was born in Topeka, KS on November 15, 1926. Her family moved to California in 1940 first to the L.A. area, then to Redlands in 1941. She attended Redlands Jr. High and Redlands High School graduating in 1944. After high school, Sally worked for Kaiser Steel in charge of the mail room. She also worked for Keystone Drugstore when it was located on State St. and later worked for Howard Smith Jewelers until she married. Sally married Richard D. West, September 3, 1947 while he was completing college at USC. They lived in Long Beach until he graduated with a degree in Journalism in 1949. They then moved back to Redlands where her husband worked for the Redlands Daily Facts for 30 years. During Sally’s children’s formative years, Sally was a stay at home mom. She served as Ways and Means chairman for both Smiley Elementary School and Cope Jr. High School as a member of the PTA Board. She also served in the Redlands High School PTA Board. She was a member of the YMCA Board responsible for building maintenance. Sally volunteered for Habitat for Humanity; she worked on building a house in Loma Linda and placing signs at the different locations where homes were being constructed. Sally was also on the Admission Committee for Redlands Meals on Wheels. In 1963, Sally began working for the Redlands Unified School District at Smiley School as a half-time clerk, the school her children attended. She later worked at Lugonia Elementary School before becoming a Health Clerk. As a Health Clerk, she was assigned to one Junior High and five elementary schools. She worked for the school district for 27 years before retiring in 1990. Sally began playing tennis at the age of 40 and continued until the age of 75. She was a member of the Redlands Swim and Tennis Club and the Redlands Racquet Club where she served as Social Chairman in 1973. Sally is survived by her children: Jane Witham and her husband Fred, Rick West and his wife Karen, all of Redlands, and Patty Brown of Lakeside, four grandchildren; Marti and her husband Andy, Rick and his wife Katy, Jamie and her husband Tim, and Matt and his wife Amy; nine grand-children and many nieces and nephews. Cortner Chapel is in charge of arrangements, with private family burial at Hillside Memorial Park.

Send flowers to the West family.