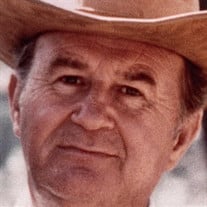 Russell James “Jim” Glaze passed away peacefully in his sleep on November 15, 2019. He was 95 years old. A native of Waveland, Indiana, Jim was the eldest child born to Richard James Glaze and Estelle Mable Henning on June 17, 1924. He had three brothers, Harold, John, and Arthur as well as one sister, Mary Ethel, who passed away at three years of age from pneumonia. Jim was raised and educated in Indiana, first coming to Redlands in 1943 as a young serviceman attached to the 22nd General Hospital in Beaumont. He met Marguerite Woods in Redlands where she was a hostess at the Redlands USO. He was sent to England in 1944 and spent two years there until the end of World War II. Returning to Redlands, he and Marguerite were married on April 14, 1946, in Highgrove, California. Following the wedding, Jim worked as a potter at Universal-Rundle in Mentone for seven years, while Marge worked at Norton Air Force Base. In addition to his job at Universal-Rundle, Jim was buying and selling cars on the side. It was finally in 1952 that Harry Wilson, owner of the Lincoln-Mercury agency in Redlands, persuaded Jim to work for him as a part time salesman. This led to a full time job and eventually a half ownership of the business. In September of 1956, Jim bought out his partner, Harry Wilson, and the agency became Jim Glaze, Inc. Over the years, he and his two sons, James David and Christopher Scott, added franchises until the auto center included Lincoln-Mercury, Navigator, Oldsmobile, Dodge, Dodge trucks, Jeep-Eagle, Chrysler-Plymouth, and Mazda. Jim was a past president of the United Way, Chamber of Commerce, Rim of the World Riders, and Redlands Automobile Dealers Association, and was selected Man of the Year in 1966. He has been on the board of directors of Redlands Community Hospital, Family Service Association, and San Bernardino County Museum, and has been a member of the Park Study Committee, Regional Economic Development Corp., and an advisory committee of the Redlands Unified School District. He was a past member of the San Bernardino Sheriff’s Rangers and the Redlands Optimist Club, and is a life member of the Redlands Elks Lodge No. 583. He was active in the local Boy Scouts Council and received the Silver Beaver Award for his leadership. He has been the dealer representative for the Lincoln-Mercury Division to the National Automobile Dealers Council and a member of the Lincoln Mercury and Mazda Advertising Associations, and served on the Chrysler Dealer Advertising Board and the board of the Southern California Motorcar Dealers Association. He was president of the Niland Duck and Geese Hunting Club and was a member of the Redlands Country Club. In addition to all of his work and volunteering, Jim was an avid hunter, a great horseman, and a serious fisherman who loved and spent many hours on his custom designed sport fishing boat, “The Gentleman Jim.” He also enjoyed passing down those skills to his children and grandchildren. Jim was preceded in death by his parents, siblings, and wife Marguerite. He leaves behind a legacy of descendants through his two sons: Jim and his wife Alexis and Chris and his wife Lori. Jim and Alexis’ children are Andy, Shelley, Hamilton, and Alexandra. Andy and his wife Lauren have Hayden, Peyton, and Marley. Shelley and her husband Pete have Cora Marie and James. Hamilton and his wife Erin have Penelope, Charlotte, and Keene. Alexandra and her husband Doug have Weiler and Georgia. Chris and Lori’s children are Melody, Nicholas and Matthew. Melody and her husband Jonathan have Aidan and Zoe. Nicholas and his wife Stormi have Jaclyn, Griffin, and Lincoln. A Celebration of Life will be on January 2, 2020 from 11:30am-1:30pm at Redlands Country Club. All are welcome. He will be dearly missed.

The family of Russell James Glaze created this Life Tributes page to make it easy to share your memories.

Russell James “Jim” Glaze passed away peacefully in his sleep...

Send flowers to the Glaze family.