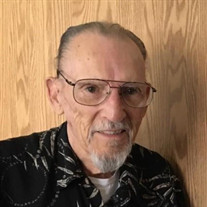 Roger Paul Oxenford, 93, passed away on Thursday, May 21, 2020, in his home in Redlands, California. He was born in Rockford, Illinois on December 1, 1926, to Wayde and Arminta Oxenford. Later, his family moved to Iowa where he was raised. Roger graduated from Boone High School Class of '45 in Boone Iowa. He is a United States Navy veteran, having served during World War II. On October1, 1946, Roger married his high school sweetheart, Louise McVicker. Roger and Louise later moved to California where they continued to add to and raise their family of five daughters. Roger was a retired professional sign painter for Lucky Stores and during his early California days he worked for a time at Knott's Berry Farm. After retiring in the late 1980's, he and Louise moved back to Iowa where Roger worked part-time for Moffitt's Ford. After 30 years in Iowa, Roger and Louise moved back to California to be closer to family and lived at Mission Commons for their final years. Roger was athletic and artistic. He was a low handicap golfer and played softball into his 60's. He shared his artistic side through singing baritone semi-professionally and using his Old English calligraphy skills, he made many new friends by writing their names in Old English calligraphy. Numerous businesses and civic groups used his skills to create beautiful signs, banners and window paintings. Roger was preceded in death by his wife of 71 years, Louise (McVicker) Oxenford, his parents, Wayde and Arminta Oxenford and five siblings. Roger is survived by his five daughters, Vicki Hibshman and husband Joell of Virginia, Cindy Mellis and husband Gordon of California, Paula Oxenford of California, Laura Eichar and husband David of California, Patty Oare and husband Chris of Utah Margaret Kooser of Louisiana. Roger has nine grandsons, Roger Hibshman (deceased) and wife Tammy, Randy Hibshman, Nathan Mellis, Stephen Mellis and wife Clara, Cameron Eichar, Will Eichar, Brad Eichar, Matt Oare and wife Annie and Ted Oare. He also has six great-grandchildren and one great-great grandchild. A Memorial Service in Boone, Iowa, is being planned for the fall.

Roger Paul Oxenford, 93, passed away on Thursday, May 21, 2020, in his home in Redlands, California. He was born in Rockford, Illinois on December 1, 1926, to Wayde and Arminta Oxenford. Later, his family moved to Iowa where he was raised. Roger... View Obituary & Service Information

The family of Roger Paul Oxenford created this Life Tributes page to make it easy to share your memories.

Send flowers to the Oxenford family.