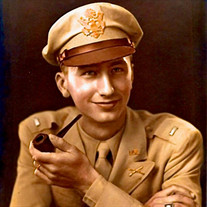 Robert M. Brezsny (1925 - 2019) “The time has come, the Walrus said”….for all good things to end” including the long and marvelous journey of a lifetime for Robert Brezsny, a 40+ yr resident of Redlands who passed away peacefully in his home on December 22nd. Surrounded by his wife of 74 years and his four children, his last days were full of reflection, quiet dignity and numerous expressions of love and care from family and friends. And as Bob departed, the Walrus ad-libbed: “That was a heck of a ride, kid!. Bob lived an exemplary life of service to family, community and country. He forged many lasting relationships and touched many hearts with his grace, impeccable character and consistent good cheer. He was meticulously organized. He was fabulously detailed. He never complained. He was exceedingly kind. And he will be sorely missed. While it’s impossible to adequately summarize the breadth of any life, here are a few of the high points in Bob’s: He was born in 1925 in Detroit, Michigan to Robert and Mary Brezsny, hardworking immigrants from Eastern Europe who instilled some of the core values that Bob carried throughout the rest of his life: the necessity of hard work, attention to detail, a heightened sense of responsibility, the desire to improve, a silent pride and a dedication to fairness and honesty. He was a child of the depression and came of age during the challenging times of World War Two. Those early experiences shaped his worldview and added strength to his character. Like other members of the Greatest Generation his life was rooted in sacrifice, patriotism and the dream of better opportunities for his children. After graduating from Northern High School, he went on to Michigan State to pursue a degree in mechanical engineering. That’s where Bob took notice of an outgoing English and theater major, Felice, while he was working as a busboy to earn tuition, in her dormitory cafeteria. A courtship ensued and blossomed through long walks they took and the moonlight serenades Bob sang, in lieu of the money that was so scarce at the time. They spent weekends dancing at the student union and became talented ballroom dancers together earning the nickname: “Dancing Fools.” From those precious beginnings, their relationship grew into the central theme of Bob’s life. Felice was his true love, lifelong partner and soulmate. Together they built successful careers, a family and a marriage of uncommon tenderness, respect and devotion. Other couples regularly stood in awe, not just at the longevity of their marriage but also at the enduring sweetness of it. They were married on June 16th, 1945, as Bob was preparing to ship out to the Pacfic theater, six weeks before the scheduled invasion of Japan. He had just graduated from Ft. Benning as a 2nd Lt. in the Infantry. Thanks to providence and Harry Truman, he was spared combat and was ultimately able to return to Michigan State to complete his engineering degree. Bob and Felice graduated together in 1948 and after that they launched their post-war journey together. Chapters along the way included early years in Borger, Texas, a return to Detroit and subsequent job advances in the cement industry to Poland Ohio, Cherry Hill New Jersey and Orangeburg South Carolina - all while raising a family of four bright and challenging kids. They moved to Redlands when Bob took a job with Cal Portland Cement in Colton in 1978 and he worked as a chief engineer until his retirement in 1993. For the rest of his life, Bob dedicated countless hours to various local community groups including: Trinity Episcopal Church as Senior Warden, Redlands Footlighters Theater Group as both President and Treasurer, Knights of the Roundtable and Military Officers Association. Bob had a close circle of friends in Redlands, that has sadly continued to shrink in recent years as the Greatest Generation passes. He’ll be joining those that have preceded him in death. He is survived by his wife of 74 Years, Felice, his sons, Rob (Ro) and Tom (Terry), his daughters Janus and Priya (Rob) along with four granddaughters, Gabrielle, Zoe, Jasper and Chloe. A celebration of life will be scheduled for later this month and final interment will be delayed until Felice and Bob’s ashes can be mingled and laid to rest together in perpetuity at the Riverside National Cemetery. The family wishes to say a final thank you to the Redlands Hospital Hospice Team who helped nurture and care for Bob with remarkable skill. In lieu of flowers, the family suggests donations to a favorite charity and also passing love and kindness on to others.

The family of Robert Matthew Brezsny created this Life Tributes page to make it easy to share your memories.

Send flowers to the Brezsny family.