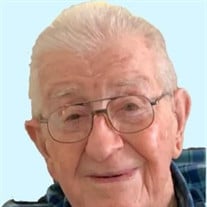 Raymond (Ray) Schmitz, 96, of Redlands, CA passed away Sunday, October 31, 2021. He was born on September 21, 1925 in Shelbyville, IL. Dorothy, his wife of 67 years, preceded him in death. Ray had 8 children: Trish Michalski (Steve), Diane Schmitz, Janet Servi (John), Jerry Schmitz (Frances), Dave Schmitz (Gina), Ken Schmitz, who preceded him death (Regina), Dale Schmitz (Amy, who preceded him in death) and Mary Patterson (Steve). Ray had 21 grandchildren Susie (Michalski) Farrell preceded him in death, and 20 great-grandchildren. Ray is survived by his siblings, Clarence Schmitz, Rosemary Huttes, Eugene Schmitz and Leland Schmitz. His parents, Winand and Ludvina Schmitz and brother, Lester Schmitz preceded him in death. Ray was a member of the Holy Name of Jesus Parish (Olive) in Redlands. He had served as Eucharistic Minister, and was a 74-year member of the Knights of Columbus. Ray had served in the United States Army in the Korean War. He was a farmer for many years in Illinois and an U.S. Postal Worker. Memorial Mass for Ray is Wednesday, November 24, 2021 at 11:30 AM, with the Rosary preceding the Mass at 11:00 AM. Burial will be at Riverside National Cemetery at 1:30 PM. A reception will be held after the burial, approx. 3:30 PM at the Holy Name of Jesus (Olive) parish hall. In lieu of flowers, please make donation in Raymond’s memory to: American Heart Association, American Cancer Society or Catholic Charities.

The family of Raymond C. Schmitz created this Life Tributes page to make it easy to share your memories.

Send flowers to the Schmitz family.