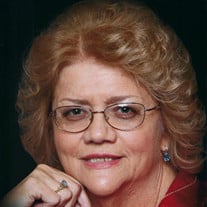 Born Mary Grace Pyle in San Francisco on April 27th, 1947. God called her home to the Kingdom of Heaven on August 21st, 2020 after a long battle with end stage renal disease, diabetes and heart disease. Mary Grace was preceded in death by her loving parents, Margaret Mary Finigan-Pyle and Gilbert Witt Pyle who adoringly called her “Schmoe”; as well as her dear brother Gilbert Edward Pyle. She is survived by her true joys in life, her four children, Karim M. Amara, Nora J. Klimper, Jamel J. Amara and Leila N. Amara; her favorite son-in-law Benjamin D. Klimper, husband of Nora; her beloved daughter-in-law’s Jennifer Amara, wife of Jamel, and Halley Darigan, fiancée of Karim; and her four grandchildren who gave her the strength to carry on throughout her illness, Robert J. Klimper, Matthew T. Klimper, Jasmine M. Amara and Joseph S. Amara – who we all suspect she loved more than her own kids. A proud fourth-generation San Francisco native, Mary Grace relocated to Redlands in the early 2000s to be closer to her grandsons. Mary Grace was raised a devout Catholic and attended parochial school at All Hollows and graduated from Notre Dame Des Victoires in 1965. She took classes in Archeology and Egyptian Studies at City College of San Francisco before jetting off to Cairo, Rome, the Vatican, Paris, Dublin and many other far-away exotic places. Even as her health declined, Mary Grace continued to travel to museums, amusement parks, movies, live theatre and her favorite local destination, Oak Glen. Family and friends are invited to an outdoor Memorial Mass at Holy Name of Jesus Parish at 1205 Columbia Street in Redlands, California 92374 on Friday September 4th, 2020 at 9:30am. Face coverings and socially distancing will be required. Due to the current Coronavirus Pandemic, the family will not be holding a wake before or after the Memorial Mass for everyone’s health and safety

Born Mary Grace Pyle in San Francisco on April 27th, 1947. God called her home to the Kingdom of Heaven on August 21st, 2020 after a long battle with end stage renal disease, diabetes and heart disease. Mary Grace was preceded in death by her... View Obituary & Service Information

The family of Mary Grace Amara created this Life Tributes page to make it easy to share your memories.

Send flowers to the Amara family.