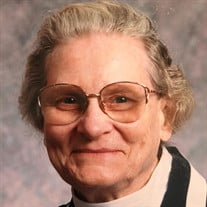 Psalm 121* I will lift up mine eyes unto the hills, from whence cometh my help. My help cometh from the Lord, which made heaven and earth. He will not suffer thy foot to be moved; he that keepeth thee will not slumber. Behold, he that keepeth Israel shall neither slumber nor sleep. The Lord is they keeper; the Lord is they shade upon thy right hand. The sun shall not smite thee by day, nor the moon by night. The Lord shall preserve thee from all evil: he shall preserve they soul. The Lord shall preserve thy going out and thy coming in from this time forth, and even for evermore. *King James Version Life Sketch Lenoa Carolyn Dunn Rios was born November 26, 1922 in Denver Colorado to Marie Moore and Howard Dalrymple. She was named Elizabeth Marie. Soon thereafter, she was adopted by Elder Norman and Floy Dunn. The name they gave her was Lenoa Carolyn. Their family moved often as her father served as a pastor/evangelist and principal in Colorado, Montana and Oregon. Then international travels began. In 1928 the family was called to work in Panama and Costa Rica for 10 years. It was during this time that she met her future husband. He took great pleasure in teasing her and when sitting at a desk behind her, would dip her long braids in his inkwell and/or pull her hair. In 1938 the family was called to Argentina. They embarked via ship from New York. She continued her schooling in Entre Ríos, Argentina at el Colegio Adventista del Plata. Four years later, she and her brother, Larry, returned via ship to the U. S. to attend Southwestern Junior College in Keene, Texas. With all the traveling, she took a real fascination with ships. It was during her time at Pacific Union College in Angwin, California that she reunited with her childhood tease, Antonio Rios, and this time they fell in love. She was accepted into the Loma Linda nursing program and moved south to pursue her goal. She would recall later how she dreamed of being a nurse on the Luzeiro, a medical launch on the Amazon River. While in nursing school [or had she finished?], her folks had returned from mission service and were living and working in Glendale, California. They received a call to return to South America. She promptly asked Antonio if he was still interested in getting married because she wanted her Dad to marry them before her parents left the country. He answered in the affirmative. So, in about two weeks the planning came together. However, her shoes were accidentally forgotten in Loma Linda so she was a barefoot bride. That was a fond memory. After she finished the nursing program, they moved to Maryland, where she began her career at the Washington Sanitarium and Hospital (later renamed Washington Adventist Hospital), remaining there until her retirement, with the exception of time off when each child was born and a couple of tours at the Gorgas Hospital on the then Panama Canal Zone. She specialized first in pediatric nursing, later as night nursing supervisor of the whole hospital, and finally as infection control nurse. The four children were born between 1949 and 1956 and life was busy. There were grandparents and extended family close by to add to memory making. Lenoa was an accomplished seamstress, making clothes for the family with great care and precision. She was gifted in the textile arts and absolutely was thrilled to learn more and more skills from anyone willing to teach her. She knit by hand and machine, crocheted all kinds of things and learned to make intricate bobbin lace and smocking. Any yarn or thread in her hands would be transformed into a beautiful piece. She had carefully planned her retirement but suddenly shifted to accommodate her adventure-seeking husband's plans of traveling and living abroad. It was to be a huge chapter in her life as she adapted to life in China and taught English to students. She learned to do many unfamiliar things and she strongly and bravely took up the challenge. She made bread and tofu and ate many strange foods. After two terms in China, they did service in Madagascar. Their dream of living in Boquete, Chiriquí, Panama was realized. She had designed their house and it was built right next door to her brother-in-law's and sister-in-law's home. They enjoyed the scenery and the mild temperatures. After healing from a broken hip, they returned to the U. S., staying for a time at their residence in Maryland and then to live with their daughter in California. She was widowed in 2019. However, she clung to life for another three years interested in the goings-on with her children, grandchildren, and great-grandchildren.

Psalm 121* I will lift up mine eyes unto the hills, from whence cometh my help. My help cometh from the Lord, which made heaven and earth. He will not suffer thy foot to be moved; he that keepeth thee will not slumber. Behold, he that keepeth... View Obituary & Service Information

Send flowers to the Rios family.