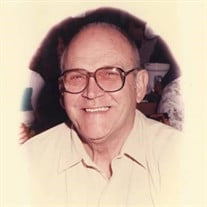 Herbert Lynn Van Horn was born on February 13, 1926 in North Loup, Nebraska. He entered into rest on June 24, 2020. Lynn came to California as a child. He attended Mission School and Redlands Junior/Senior High School. He served in the United States Navy as a ship's cook second class. It was at this time in the service, Lynn would say, his life truly began. He met his wife Opal at Hudlow's Drive-In and worked there for nearly forty years. Lynn and Opal raised four children and were actively involved in their activities. Countless days were spent at baseball and football games, and concerts and competitions. Lynn was always their biggest fan, often bringing drinks and snacks and any odd thing that was needed in a pinch. He was the rescuer; the man with the gas can, the jumper cables, the shovel and the ice chest. Lynn was also an active member of the community in Redlands. He was on the initiating board for the Redlands Boys Club. He was an early and active member of the Benchwarmers, and Baseball for Boys, supporting youth sports. He received many awards and wide spread love and appreciation for his generous and active support of numerous teams, choirs, bands and organizations. After Hudlow's closed, Lynn worked, until retirement, at Gerrard's Market in Redlands. He was an enthusiastic, cheerful man who was quick with a joke and a smile. He loved a family vacation, fishing in Mexico, throwing a good party, and tackling a home improvement project. He built an exhaustive, catalogued record collection and actively, purposefully listened to music. He was a devoted dad to several pets in his later years-even though he never wanted them. Until recently, he was still walking the husky, Ginger, every day in his scooter. Baxter, the chihuahua, rode in his arms much of the day. The cats even were around and in his bed. The most important thing, without a doubt, in Lynn's life was his sweetheart, Opal. His love and devotion to her remained his priority until the end. Lynn was a wonderful example of family devotion and everyone he met considered him a friend. Lynn is survived by his wife of nearly 73 years- Opal Mae, son Ron and daughter-in-law Karen, daughter Cindy, four grandchildren, five great-grandchildren, and four great-great-grandchildren. He was preceded in death by his sons Tim and Randy.

Herbert Lynn Van Horn was born on February 13, 1926 in North Loup, Nebraska. He entered into rest on June 24, 2020. Lynn came to California as a child. He attended Mission School and Redlands Junior/Senior High School. He served in the United... View Obituary & Service Information

The family of Herbert Lynn Van Horn created this Life Tributes page to make it easy to share your memories.