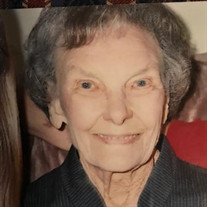 Hazel Irene Cook passed away on October 6, 2020. Hazel was born on January 17, 1926 in Fullerton, Ca to Ernest and Ethel Stone. She had an older sister, Helen and an older brother, Raymond. Hazel attended Fullerton Junior College and then transferred to the University of Redlands, where she met her future husband, William Cook. After she graduated from the U of R in 1947, Hazel and Bill were married and she began her teaching career in Redlands. The Cooks welcomed son Terry, in 1948 and twins David and Deborah in 1952. Hazel resumed her teaching career in 1957. She taught kindergarten and second grade for many years at Mission Elementary School. Before retiring in 1983, she was the Title One program planning teacher at Mission. Hazel was a member of University United Methodist Church for over 70 years. She belonged to Fidelis Iota Sorority, Redlands-Yucaipa Retired Teachers Association and was a chairman and delivery driver for 30 years for the Redlands Meals On Wheels. Hazel had many interests. She enjoyed cooking, gardening and sewing. She did Yoga, played golf and belonged to several Bridge Clubs. She and Bill travelled extensively all over the world. When their children were young, they had a travel trailer. After they retired, they had a large motor home and belonged to the local Cross Roaders Club. Hazel was preceded in death by her parents, her brother and sister, her husband Bill of 59 years, her son David and her grandson, Bruce Knight. She is survived by her son, Terry Cook, her daughter Deborah Knight, granddaughters Melissa Hoyal, Brenda Knight-Hollenbeck, Monica Cook and Kathy Depintor. She is also survived by 8 great grandchildren and 8 nieces and nephews. Services will be private. The family requests that in lieu of flowers, donations may ne made in her name to University United Methodist Church, 940 E. Colton Ave., Redlands, CA 92374 or Redlands-Yucaipa Retired Teachers Association scholarship Fund.

Hazel Irene Cook passed away on October 6, 2020. Hazel was born on January 17, 1926 in Fullerton, Ca to Ernest and Ethel Stone. She had an older sister, Helen and an older brother, Raymond. Hazel attended Fullerton Junior College and then... View Obituary & Service Information

The family of Hazel Irene Cook created this Life Tributes page to make it easy to share your memories.

Send flowers to the Cook family.