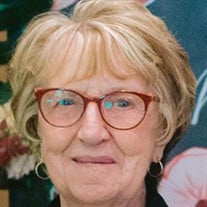 Geri E. O'Neal, loving wife, mother, grandmother and former teacher, passed away peacefully on January 2, 2020, after a short hospital stay. She was 85. Geri, a longtime volunteer in the Holy Name of Jesus Catholic community, brought peace and light into the lives of all who knew her. She will be sorely missed in this community. She was born on January 14, 1934, in Winnipeg Manitoba, Canada, of Belgian descent, and lived there until she met her husband of 56 years, Don in Grand Forks, North Dakota, where he was stationed in the Air Force. They lived there for two years and then began their episodic travel journeys with the Air Force, living in Texas, New Hampshire, Winnipeg (while Don served in Thailand), Arkansas, North Dakota, Germany, California, Hawaii and finally back to California, settling in Redlands. While living in Hawaii and volunteering there, Geri joined the Aloha Medical Mission, which provides medical services to the remote communities in the Philippines, where the doctors with the Mission perform much needed routine surgeries. While she was there in 1989, the Mission was in the area where a coup was attempted, but although their return to Hawaii was delayed, all the volunteers returned home safely. Geri's life revolved around her family and close friends and she was very active in her children's and grandchildren's lives. She was a strong, participating member of her church, always seeking ways she could volunteer to serve her church community. For her volunteer work, she was recognized by the Catholic Diocese of San Bernardino in 2004 with the St. Bernardine Award for her dedicated service in ministry. Geri is survived by her husband Don, daughter Sharon Baguyo (Dios) of Loma Linda, son David O'Neal (Katherine) of Waipahu, Hawaii, grandchildren Heather (Aaron), Anthony (Sierra), Daniel, Jessie, Sarah, Aidan and Amber, great grandchildren Kane, 8, August, 3 months, and Sage, 3 months, a sister Eleanor (Gilles) and a nephew and six nieces. A rosary will be recited at 10:00AM followed by Mass on Friday, January 17, at The Holy Name Of Jesus Catholic Church at 115 W. Olive Ave in Redlands. A graveside service will be held at Riverside National Cemetery at 10:45 AM on Tuesday, January 21. In lieu of flowers, donations can go to the American Lung Association, 55 W. Wacker Dr., Suite 1150, Chicago, Il 60601.

The family of Geri E. O' Neal created this Life Tributes page to make it easy to share your memories.