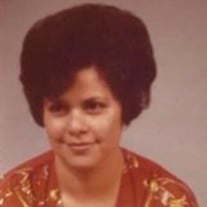 Georgia Christine McIntosh, known to many as Mammy, passed away at home on Sunday April 3RD, 2022 at 12:53 AM. She was born on October 5th, 1943, in Redlands, California. Her parents were Alfred Sanchez and Reynalda Munoz. Georgia attended Lugonia Elementary, Redlands Junior High and Redlands High School, graduating in 1961. While attending high school Georgia was involved with the Girls Athletic Association and excelled in girls’ tennis. After graduation she attended San Bernardino Valley College. Georgia married Keith McIntosh on May 29, 1965, in Redlands, CA. Together they had one daughter, Kimberly. Georgia worked at the Redlands Ford Dealership, under several different owners, for 35 years as an Inventory Manager. After that she went to school for medical coding and was employed by Epic Management for two years. Georgia then started working for the San Bernardino County as a Clerk III and retired in 2010. In the early 70’s, Georgia went to the University of Redlands and took a Japanese language course which sparked her interest in the sport of Judo. Georgia practiced Judo earning a third-degree brown belt and placing third in the Judo Nationals in New York. In the mid-70’s, Georgia started a ceramic doll making business called Crystal Ball Nostalgia. Her most cherished and favorite doll that she made was a Shirley Temple Doll, which is still in Keith and Georgia’s house to this day. Georgia had a love for traveling and taking cruises. Some of her trips included cruises to the Bahamas (two of which were with Richard Simmons), and many different states to watch Kimberly compete in water polo tournaments. Georgia practiced dance at Redlands School of Dance for over 20 years. Georgia had many interests and hobbies including collecting Christmas “everything”, scrapbooking, spending time with her two grand-daughters, Brooke and Caitlin, and two great grand-children, Elle and Theo. Her most favorite memories were watching Brooke and Caitlin compete and perform in cheer and dance. Georgia is survived by her husband of 56 years, Keith McIntosh; daughter Kimberly Blaylock (Matt); grand-daughter Brooke Smith (Zach); grand-daughter Caitlin; two great grand-children Elle and Theo; three brothers Alfred (Pat), Frank (Dolores), and twin George (Rosemary); one sister Joan Rey; and numerous nieces, nephews, and cousins. Georgia is loved by many and will be missed deeply. The McIntosh Family would like to thank Georgia’s niece, Donna Ragusano, Janet Keller from Visiting Angels and VITAS hospice nurses and staff for taking care of Georgia and making her comfortable in her final days. In lieu of flowers please consider placing a donation with the American Parkinson Disease Association.

Georgia Christine McIntosh, known to many as Mammy, passed away at home on Sunday April 3RD, 2022 at 12:53 AM. She was born on October 5th, 1943, in Redlands, California. Her parents were Alfred Sanchez and Reynalda Munoz. Georgia attended Lugonia... View Obituary & Service Information

The family of Georgianna Christine McIntosh created this Life Tributes page to make it easy to share your memories.

Georgia Christine McIntosh, known to many as Mammy, passed away...

Send flowers to the McIntosh family.