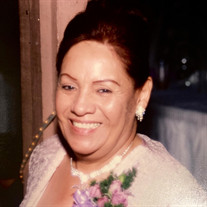 Dorothy Cabral Llamas passed away peacefully on December 1, 2019, surrounded by her husband, children, grandchildren, great grandchildren and twin sister Doris Cabral. She was eighty years old. Dorothy was born and raised in Redlands, California, where she was one of ten children born to Incarnecion and Jovita Cabral. Dorothy's mother passed away at a very young age and her father went on to meet and eventually marry Mary Cabral. They went on to have 8 children together and Dorothy grew up with a total of eighteen brothers and sisters. Her first job was at the Redlands Cleaners, which used to be in downtown Redlands, around the corner from the soda shop where she and her friends used to gather and enjoy listening to music together. Dorothy would move on to work at Plymouth Village of Redlands as a laundress, where she would eventually retire at the age of sixty years old. In her early twenties, Dorothy met a young man from Aguascalientes, Mexico by the name of Francisco R. LLamas. They were later married on January 7, 1961. Dorothy and Frank would go on to have six children; Salvador, Elsa, Eddie, Jesus, Susie and Sonia. They began their journey as a family on the North side of Redlands. Dorothy and Frank would eventually move the family to a beautiful home on the south side of Redlands, where they would continue to raise their children and eventually welcome their grandchildren and great grandchildren. Dorothy was a very hard working and loving wife, mother, grandmother and great grandmother. After a full day's work, she would often come home to her family and no matter how tired she was from the day, she would always take time to make dinner for her family. Dorothy's children especially could not wait for her to come home and make her homemade flour tortillas, which they were so eager to have, they would often eat them right off the "placa" or hot skillet! In addition to her homemade flour tortillas, Dorothy's family enjoyed her homemade pozole, albondigas and rice and beans. To this day, although many have tried and continue to try, no one in the family could ever quite make her homemade dishes as good as she could. Dorothy was never one for materials things or vacations, as she regularly enjoyed her little trips to the Casinos in Las Vegas, Primm Valley and in the surrounding Inland Empire area. Her real joy in life was her family. All of the memories made and enjoyed with the family for holidays, birthdays, anniversaries and simply just days spent together, have always and will always be cherished and remembered. Dorothy has always and will continue to be loved by her husband of 59 years, Francisco R. Llamas, her six children; Salvador Llamas, Elsa Brannan, Eddie Llamas, Jesus Llamas, Susie Smith and Sonia Llamas, her thirteen grandchildren; Michael Llamas, Jonathan Trovato, Meghan Guillermo, Hailey Smith, Eric Llamas, Kenny Smith, Joel Smith, Jake Smith, Jesse Llamas, Caleb Smith, Hanna Llamas, Madison Llamas, and Allison Llamas, her three great grandchildren, Zoey Trovato, Isabella Trovato, and Ethan Llamas, as well as her children's spouses; Lisa Llamas and Ken Smith and her grandchildren's spouses; Mouly Llamas, Edwin Guillermo and Vanessa Trovato; her step mother, Mary Cabral; all of her sisters, brothers and many nieces and nephews. Thank you Jesus for blessing us for so many years with such an amazing woman! A Celebration of Life will be held at Cortner Chapel in Redlands, CA on December 12, 2019 at 1:00PM, a reception to follow.

The family of Dorothy C. Llamas created this Life Tributes page to make it easy to share your memories.

Send flowers to the Llamas family.