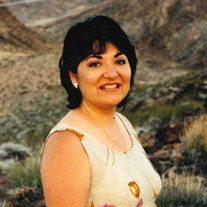 Not sure what to send?

Cathy Rivera, beloved wife, mother, and grandmother, 62, passed away peacefully in Redlands, California on Sunday, April 10, 2022, after a courageous battle with cancer, at her home surrounded by her family and friends. She was the wife of Joseph Rivera III. They shared 43 years of marriage together. A native of Redlands, Cathy was an alumnus of the Redlands High School Class of 1977 and participated as a member of their Tall Flag Team. Cathy also volunteered to the disabled student program. She was a manager in downtown Redlands at Crackerjacks Gift Company for several years. She was a member of the Saint Joseph the Worker Church Choir, and her passion for music led to her involvement in the Riverside Entertainers show band. An avid reader, Cathy also belonged to several book clubs which she participated in with her longtime-friend Diane Sweeney of Highland. She is survived by her husband, Joseph Rivera III, of Redlands, her son Joseph Rivera IV of San Bernardino, daughter Alexandria Rivera of Redlands, daughter Michelle Rivera of Redlands, daughter-in-law Valerie Rivera of San Bernardino. Father Raymond Romero of Redlands, Sister Connie Ceja of Newdale, Idaho , Brother-in-law Raul Ceja of Newdale, Idaho, Brother Anthony Romero of Henderson, Nevada, Sister-in-law Desiree Romero of Henderson, Nevada, Brother Mark Romero of Redlands, and Sister-in-law Amy Romero of Redlands. Four grandchildren and fourteen nieces and nephews. She was preceded in death by her mother Elvira Romero. A viewing will be held from 5:00 PM-8:00 PM at Cortner Chapel, 221 Brookside Ave. Redlands, CA 92373 with a Rosary beginning at 6:00pm. Funeral Mass will be held at 10:00 AM on Wednesday, May 18, 2022 at Saint Joseph the Worker Catholic Church 10816 Mountain View Ave. Loma Linda, CA 92354. In lieu of flowers, the family requests donations be made to A.K. Smiley Library. Cathy was extremely appreciative of her friendships made with the Smiley Library staff and their mutual love of books.

Cathy Rivera, beloved wife, mother, and grandmother, 62, passed away peacefully in Redlands, California on Sunday, April 10, 2022, after a courageous battle with cancer, at her home surrounded by her family and friends. She was the wife of Joseph... View Obituary & Service Information

In Loving Memory of Cathy Rivera