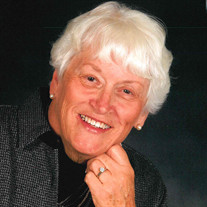 Carol Ellen Bour Carol Ellen Bour, a former teacher and longtime volunteer with the Holy Name of Jesus Catholic community, died peacefully in Redlands, California on January 11, 2020 with her three sons and other close friends by her side. Born in Sidney, Ohio on November 8th, 1936, she grew up and attended elementary and high school there. Upon graduating from Sidney High School in 1944, she attended Bowling Green University where she studied liberal arts. Carol was an avid reader and not long after graduating college, she was on vacation in New York, sitting on a park bench reading the famous novel “To Kill a Mockingbird” by Harper Lee, when she caught the interest of Joseph A. Bour, an avid reader himself. After conversing about their joint interests, the two agreed to see each other and soon fell in love. Joe and Carol were married on June 29th, 1963 at Holy Angels church in Sidney, Ohio and spent 53 wonderful years together. They had three sons, Andrew, age 55 from San Diego, CA, Stephen, age 53 from El Dorado Hills, CA and Thomas, age 49 from Half Moon Bay, CA. All three sons graduated from the University of San Diego. Carol cherished her only grandson, Brian Joseph Bour, age 13 who she was known to spoil on more than one occasion. The two always ended their phone conversations by saying “Love You More”! Being a US Marine wife, Carol spent time stationed with Joe in Parris Island, South Carolina and the Marine Corps Air Base in El Toro, CA. Carol and Joe settled in Redlands California in 1976 and soon fell in love with the small-town atmosphere, its rich history, beautiful weather and kind neighbors. One of Carol’s many passions in life was teaching. She taught elementary school for over 30 years, most recently at Cram Elementary in Redlands. Her students loved her, and Carol adored seeing them around town in their later years, catching up on what they done in their lives. Upon retiring from teaching, she was a much sought-after substitute all the way into her mid-70s. Along with her husband Joe, Jesus Christ was the anchor of Carol’s life. She converted to Catholicism in 1970 and immersed herself in her faith in God. She was very active with the Holy Name of Jesus parish in Redlands where she served alongside her husband as a Eucharistic Minister. She was also very engaged in bible study, the Breakfast Club and many other social activities where she made many lifelong friends. She is survived by her three sons, Andrew, Stephen and Thomas, her grandson Brian and two of her three brothers, Max and Dick Carey from Ohio. She was a devoted wife, mother and servant of God. She was kind, never stopped learning and had a wonderful sense of humor. She will be dearly missed by all those she touched in her fulfilling life. A viewing service will be held from 5:00 p.m. to 8:00 p.m. on Monday, February 10 at Cortner’s Chapel in Redlands, CA. Funeral services will be held at 10:00 a.m. on Tuesday, February 11 at the Holy Name of Jesus Catholic church in Redlands, CA. She will be laid to rest alongside her devout husband Joe at 2:00 p.m. following the funeral services on Tuesday, February 11 at Riverside National Cemetery in Riverside CA.

Carol Ellen Bour Carol Ellen Bour, a former teacher and longtime volunteer with the Holy Name of Jesus Catholic community, died peacefully in Redlands, California on January 11, 2020 with her three sons and other close friends by her side. Born... View Obituary & Service Information

The family of Carol E. Bour created this Life Tributes page to make it easy to share your memories.

Send flowers to the Bour family.