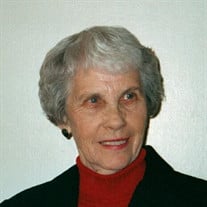 Beverly LaRue Crouch, a long time resident of Redlands died on October 16, 2019 surrounded by loved ones. She was born on May 31, 1928 in Kearney, Nebraska. LaRue received her registered nursing license through the Cadet Nurse Corps and worked from 1948 to 1953 at St. Anthony’s Hospital in Pocatello, Idaho. It was in Pocatello, after the War, that she met and married Ramon Glen Crouch on July 23, 1948 at St. Joseph’s Catholic Church. On their honeymoon they traveled through California on their way to Mexico and fell in love with the beauty of the state. They would move to California in 1956. After moving to Redlands LaRue worked at Redlands Community Hospital from 1962 to 1980 and at Plymouth Village Retirement Community from 1980 to 1992. LaRue was a member of Holy Name of Jesus Catholic Church and the Redlands Horticultural Improvement Society. Once retired she volunteered with Meals on Wheels and was a Plymouth Village Associate. Beverly LaRue is survived by her husband of 71 years, Ramon, her children and their spouses, Michael Crouch and Randy Joseph of Seattle, Jan and Jim Hawkins of Boulder City, Marisa Crouch and Dale Hawkins of Redlands, and Carolyn and Steve Miller of Asheville. In addition to their four children, they have five grandchildren—Sara Gutierrez, Jennifer Barnthouse, Evan Crouch, Julia Crouch, and Deva Hetrick. LaRue also has 10 great-grandchildren. She is also survived by her siblings; Bobbe Griffith (John) from Idaho Falls, Idaho and Tom Criss (Mary) of Belmont, CA. A private family service will be held at Riverside National Cemetery. The Crouch family will also hold a “Celebration of Life” in honor of Beverly, in Carlsbad, CA this spring. In lieu of flowers donations can be made to the Alzheimer's Organization in her name.

Beverly LaRue Crouch, a long time resident of Redlands died on October 16, 2019 surrounded by loved ones. She was born on May 31, 1928 in Kearney, Nebraska. LaRue received her registered nursing license through the Cadet Nurse Corps and worked... View Obituary & Service Information

The family of Beverly La Rue Crouch created this Life Tributes page to make it easy to share your memories.

Send flowers to the Crouch family.